My normal blog being down like an elevator, I am left having to file my blog here.  Just wanted to let you know that my latest novel, "Medicine Park" is now available for your Kindle (& Kindle Fire, and iPad & Android and etc.) here!

What's it about?  T quote from the official descriptive text ... "Brad Reynolds' parents died in a car wreck the same day his divorce was final. Trying to put the pieces of his life back together, Brad moves back home to Medicine Park, OK, and takes over his father’s old business. The bait and hardware shop are doing good, Brad’s making some friends, has started going to church and is even trying to start dating again. The only hitch is that he is an addict. He’s kept his addiction well-hidden, for he’s sure that if it were ever to get out his friends would leave him, his business would crumble, and his whole life would collapse. Trying to quit cold-turkey isn’t working, so Brad tries to find one of these new-found friends in which to confide. Can he find someone before he destroys everything—one way or another?" 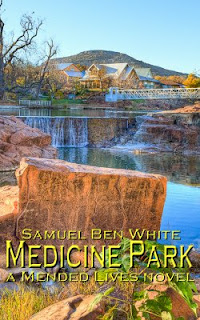 But then he starts meeting people who have some pretty old-fashioned standards.  Including a woman named Allie who he's very interested in but her standards are informed by her faith.  Her faith is one of the things he likes about her, and he's beginning to want to share it, but to do so he's going to have to change and give up something that has been driving his life for years.  Once he begins to try to give it up, he comes face-to-face with just what a horrendous hold it has on him.
Posted by Overstreet at 7:35 PM No comments: