Will Our Pets Be in Heaven?

A friend of mine here in town, we’ll call him Ted, doesn’t go to church anymore.  He never went often, but he was going sporadically there for a little while.  Then—for some reason and I have no idea how it even came up in conversation—the preacher at the church where Ted was going told him that his dog absolutely would not be in heaven. 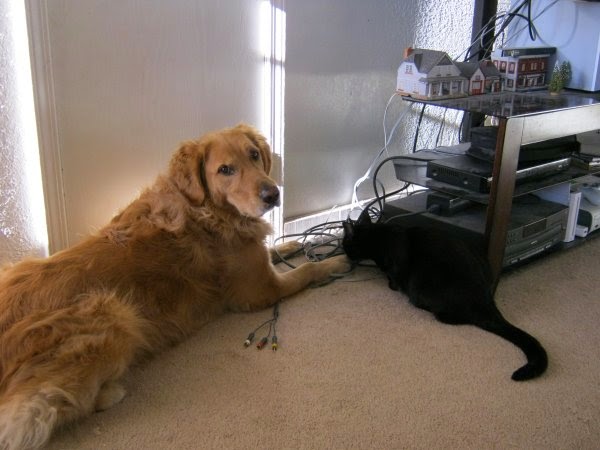 It wasn’t that the preacher hated Ted’s dog.  The preacher was just certain that no one’s pets would be in heaven.  None of them.  No pets in heaven.  It was a certainty!

Now, some people are going to object on the basis that saying so was insensitive since it clearly drove someone away from the church.  On that score, if the preacher truly believes there will be no pets in heaven, then I don’t mind him saying so.

What I mind is that, having read the Bible through many times, I am confident that Scripture says absolutely nothing about the topic in any way*.  I would never tell anyone their pets won’t be in heaven … nor would I tell anyone their pets will be in heaven.  If you can find anywhere in Scripture that addresses the topic at all, please leave a comment below because I think the Bible says even less about pets than it says about whether space aliens will receive salvation (http://garisonfitch.blogspot.com/2014/08/do-we-have-something-better-to-do-with.html).

Why does the preacher believe that no pets will be in heaven?  Because, he says, to get into heaven one must love God and pets do not have the capacity or ability to love.

To which I respond that either this man has never had a pet of his own or he defines love only as a feeling and not—as I believe it should be—as an action.

If I tell you I love you (over and over, even) but, when opportunities to actually show you love come up and I neglect to do so, you are well within your rights to doubt my love.  Love, I am convinced (from Scripture), is an action word.  God showed his love for man by sending his son (among other actions).  David showed his love for Jonathan through action.  Jesus showed his love for people (including us!) by coming, living, preaching, dying on the cross, resurrecting, and more.

By that metric, I would define pets as extremely loving.  If you have a pet, you know whether it likes you or not.  Especially a dog.  The wagging tail when you get home (after being gone for all of five minutes), the desire to snuggle, the way he trots up with his newest toy (or dead, disgusting thing he found in the yard) that he wants to share with you.  The way he camps right outside the bathroom door as you throw up.  I have a golden retriever who ain’t, as my father-in-law liked to describe him, “Eat up with brains”, but he certainly seems to be full of love.  Even my cat shows love for us (more for my wife, even though I’m the one who wanted him!).

Now, does my dog love God?  That I couldn’t tell you.  I don’t know that he has the capacity.  However, it sure seems to me like he performs well the function(s) God created him for.  I can’t say the same about me!

Will I see my pets through the years in heaven one day?  I can’t, from Scripture, say yes.  I’d like to think so.  But I also can’t say, from Scripture, that I won’t.  It’s a topic of pure conjecture and my only issue is going to be with anyone who claims to have arrived at a definitive answer.  Unless they can show me something in Scripture I’ve never seen before, I’m going to think they’ve let a wish become their belief.

*Yes, in heaven Jesus gets a horse.  Whether the rest of us will get one, I don’t know.
Posted by Overstreet at 7:21 AM